(Stafford Springs, CT)—Stafford Speedway hosted its final Friday night race program of the 2022 season with NAPA Auto Parts Championship Night on September 30. Taking down feature wins on the night were Ronnie Williams in the SK Modified® feature, Wayne Coury, Jr. in the Late Model feature, Tyler Chapman in the SK Light feature, Alexandra Fearn in the Limited Late Model feature, and Bobby Stirk, III in the Street Stock feature. With NAPA Championship Night serving as the final race of the 2022 season, track championships were clinched by Tyler Barry in the SK Light division and Rich Hammann in the Limited Late Model feature as Todd Owen, Adam Gray, and Travis Hydar clinched the SK Modified®, Late Model, and Street Stock championships respectively a week ago.

In the 40-lap SK Modified® feature, Tyler Leary led the field to the green flag and he took the lead on the opening lap. Behind Leary, Ronnie Williams took second from Michael Gervais, Jr. and he took the lead from Leary at the line as they completed the second lap. Williams cleared Leary on lap-3 with Troy Talman and Gervais wheel to wheel for third and Todd Owen in fifth.

By lap-9, Owen had worked his way through traffic to move up to second behind Williams with Marcello Rufrano up to third, Leary fourth, and Bryan Narducci in fifth. Narducci took fourth place from Leary on lap-12 while Owen was still trying to close down the gap to Williams for the race lead. Rufrano looked to take second from Owen on lap-17 but he got sideways, which slowed him enough to allow Narducci to catch him and take over third place on lap-19. Michael Christopher, Jr. took fifth from Leary on lap-20 while Williams was still leading Owen at the front of the field.

Owen was starting to slowly reel Williams in with 10 laps to go, but he ran out of time and came up just short as Williams took down his third win of the 2022 season. Narducci finished third with Rufrano and Christopher rounding out the top-5. 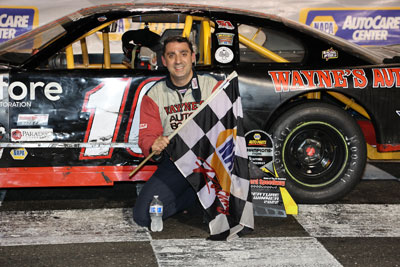 In the 30-lap Late Model feature, John Blake led the first lap before the caution came out for Adon Burrell, who came to a stop at the entrance to pit road.

A melee broke out on the restart with Michael Bennett getting sideways in front of the entire field, which collected the cars of Alexandra Fearn, Dave Wray, Adam Gray barrel into each other and Andrew Durand spun in turn 3 to bring the caution right back out before a lap could be completed.

Bennett took the lead on the restart with Wayne Coury, Jr. and Darrell Keane racing door to door for two laps before Coury cleared Keane and took second place. Michael Wray was fourth with Kevin Gambacorta in fifth. The caution came back out with 3 laps complete as Gambacorta, Andrew Molleur, Josh White, and P.J. Zarrella all got into the turn 1 wall.

Bennett took the lead on the restart but he was under heavy pressure from Coury in second with Keane in third. Tom Butler was now up to fourth with Alexandra Fearn streaking into the top-5 on the restart. Coury made a move to the inside of Bennett on lap-6 but Bennett was able to maintain the lead by a nose at the line. The two cars touched on lap-7 with Coury falling back to fifth behind Bennett, Keane, Butler, and Alexandra Fearn. Coury and Tom Fearn both went by Alexandra Fearn on lap-11 to move into fourth and fifth and drop Alexandra back to sixth in line as Bennett continued to lead Keane and Butler. The top-5 remained the same when the caution came back out with 21 laps for debris on the frontstretch.

Keane took the lead from Bennett on the restart with Coury in third behind the two leaders. The caution flag came back out with 21 laps complete as Butler stopped in turn 4.

Keane took the lead back under green with Coury behind him but the caution and red flags came back out with 23 laps complete as Bennett got sideways and collected the car of Michael Wray, who climbed up and over Bennett’s car before coming back to a rest on the ground with Gambacorta’s car also collected.

Keane took the lead on the restart with Tom Fearn nearly taking second from Coury before getting back into line in third behind Coury. Wayne Coury, Sr. was now up to fourth with Alexandra Fearn in fifth. Coury, Jr. took the lead from Keane on lap-26 with a pass in turn 2 and Tom Fearn followed him by Keane to take second and drop Keane back to third place.

Coury, Jr. lead Tom Fearn to the checkered flag to pick up his first win of the 2022 season. Keane, Alexandra Fearn, and Gambacorta rounded out the top-5.

In the 20-lap SK Light feature, Frank L’Etoile, Jr. took the lead at the green flag and he led the first lap before polesitter Amanda West retook the lead on lap-2. Ron Midford, Jr. took second behind West with George Bessette, Jr. taking third, Bob Charland fourth and Chris Matthews fifth as L’Etoile fell all the way back to tenth place. Bessette took second from Midford on lnap-5 and he nearly took the lead from West on lap-6 before he fell back to third behind West and Midford. Just behind the lead trio, Tyler Chapman was now up to fourth and Charland was fifth with L’Etoile in sixth.

Bessette was able to pull alongside West for the elad on lap-10 but he couldn’t complete the pass as the two cars raced wheel to wheel. West cleared Bessette on lap-12 while Chapman was now alongside West for the lead and he took the lead as the field completed lap-13. Tyler Barry made a 3-wide move on lap-14 to get by both West and Bessette and move into second behind Chapman with Midford in fifth.

With 4 laps to go, Tyler Chapman was in the lead with Barry and Bessette wheel to wheel for second, Midford in fourth, and Derek Debbis and West wheel to wheel for fifth. Tyler Chapman led Barry to the checkered flag to notch his fourth win of the 2022 season but Barry’s second place finish was good enough to make him the 2022 SK Light champion. Bessette, Midford, and Debbis rounded out the top-5.

In the 20-lap Limited Late Model feature, Jay Clement took the lead at the green flag with Gary Patnode, Jeremy Lavoie, Alexandra Fearn, and Rich Hammann lined up behind him. Fearn took third from Lavoie on lap-4 while Jay Clement was still leading Patnode in front of Fearn.

Patnode took the lead from Clement on lap-8 with Fearn taking second and Lavoie taking third on lap-9 as Clement fell back to fourth after leading the first 7 laps of the race. Fearn rode behind Patnode until lap-14 when she took the lead with a pass in turn 2. Lavoie was still third behind the two leaders with Jay Clement fourth and Hammann still in fifth. Dana Wray spun coming out of turn 4 and behind that spin Jeremy Lavoie spun in the middle of turns 3+4 to bring the caution out with 17 laps complete. Lavoie’s car appeared to break something in the rear end and he pulled behind the wall, done for the race. Lavoie came into the race with the point lead and was in position to claim his third championship, but his misfortune potentially took him out of championship contention.

Fearn took the lead back under green while Patnode didn’t come up to speed and he dropped back to ninth place as Jay Clement took second, Matt Clement third, Hammann fourth, and Kevin Cormier fifth. Fearn led the field to the checkered flag to pick up her third win of the season with Jay Clement and Matt Clement behind her. Hammann finished fourth, which was enough to claim the championship by 2 points with Cormier rounding out the top-5.

In the 20-lap Street Stock feature, Bill Cote took the early lead at the drop of the green flag with Jason Lafayette quickly taking second. Tyler Trott was third in line with Bobby Stirk, III in fourth and Travis Downey in fifth. Lap-4 saw Stirk make a power move to go from fourth to second with Downey following him through traffic to take third place. Adrien Paradis, III was now fourth with Travis Hydar in fifth and Stirk took the lead on lap-6. Downey again followed Stirk through and moved into second with Paradis taking third and Hydar fourth as Lafayette fell from the lead back to fifth. The caution came out with 8 laps complete for a spin in the middle of turns 3+4 by Marvin Minkler.

Stirk took the lead back under green with Paradis taking second from Downey. Ryan Waterman was now up to fourth with Hydar holding the fifth position as Lafayette fell back to sixth. Hydar took fourth from Waterman on lap-12 while Stirk continued to lead the race. The caution came back out with 12 laps complete for a spins in turn 1 by Trott and Lafayette.

Stirk again took the lead on the restart with Downey taking second one lap after the restart. Waterman settled into third with Paradis fourth and Bert Ouellette took fifth from Hydar. The caution came back out with 16 laps complete for a spin in the middle of turns 1+2 by Rob Sears.

Stirk took the lead again back under green with Downey sliding back to seventh place as Paradis took second, Ouellette third, Hydar fourth, Waterman fifth, and Brandon Warren sixth. The caution came out with 18 laps complete for a spin in turn 4 by Cote that set up a green white checkered finish.

Paradis took the lead from Stirk on the restart with Hydar in third. Stirk was able to pull back alongside Paradis on the final lap and he took the lead in turns 3+4 and led Hydar and Paradis to the checkered flag by a nose to take down his sixth win of the 2022 season. Hydar nipped Paradis at the line for second with Ouellette and Waterman rounding out the top-5.

For more information contact the Stafford Motor Speedway track office at (860) 684-2783, or visit them on the web at www.staffordspeedway.com.